The development and application of the theory of nonlinear waves span the following topics.

This idea appeared for the first time in the pioneering paper by Ablowitz, Kaup, Newell, Seegur (AKNS) in 1974. Using the Wronskian relations AKNS showed, that the transition from the potential of the Lax operator L to the corresponding scattering data is directly related to the expansions over the “squared solutions” of L. The subsequent development of the theory was based on the proof of the completeness relation for the squared solutions, or more precisely – the construction of the spectral theory of the recursion (generating) operator. Detailed 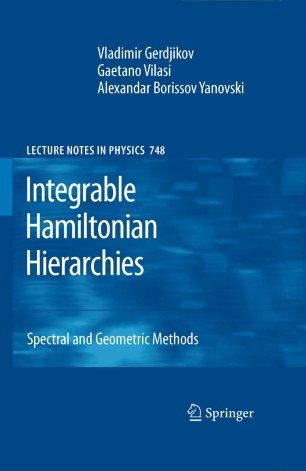 exposition of the development of these ideas on the example of the AKNS system is contained in the monograph Spectral and Geometric Methods by Vladimir Gerdjikov et al, Springer, 2008.

In the middle of the 1980s these ideas were generalized to a wide class of Lax operators like the generalized Zakharov-Shabat system related to the simple Lie algebras. Later they were adapted also to Lax operators with deep reductions of the type Z_N and D_N. Such approach allows one to study the spectral properties of the Lax operators subject to deep reductions. In a number of cases it lead also to the construction of the action-angle variables for the corresponding soliton equations. The latter include the two-dimensional Toda field theories, the systems generalizing the modified KdV equation.

Soliton interactions in the adiabatic approximation.

The adiabatic approach was proposed in the 1980s by Karpman and Soloviev for the scalar NLS equation. It allows one to study of the dynamics of the so-called N-soliton trains. Adiabaticity means that initially the soliton pulses are well separated and have nearly equal amplitudes and velocities. Karpman and Soloviev developed these ideas for the case of two-soliton train and succeeded in deriving a dynamical system – 8 equations for the 8 soliton parameters. Their results were generalized (conf. V. S. Gerdjikov et al,  2007, Theoretical and Mathematical Physics, Volume 151, Issue 3, pp 762–773)  to the case of N-soliton trains and derived the complex Toda chain (CTC) as a dynamical system, describing the evolution of the 4N soliton parameters. An important fact is that the CTC is a completely integrable system. This allowed us to predict the asymptotic behavior of the N solitons from the initial soliton parameters.

Next, the effects were analyzed  of various perturbations to the NLS equation. In this case we derived perturbed versions of CTC which also describe excellently the soliton propagation for wide class of soliton parameters and perturbations.

The deep relations among the scalar Lax operators, the Kac-Moody algebras discovered by Drinfeld and Sokolov and the reduction group introduced by Mikhailov became clear in the beginning of the 1980s. The inverse scattering problem for all of them is equivalent to Riemann-Hilbert problem. As a result one can apply the Zakharov-Shabat dressing method and derive their N soliton solutions.

The goal here is to establish that with each Kac-Moody algebra one can relate a family of integrable soliton equations. One can also introduce convenient squared solutions of L, prove that they are complete set of functions and often – derive the action-angle variables. An important tool in solving the problems of the previous section is the fundamental analytic solution (FAS) of the Lax operator which are directly related to a Riemann-Hilbert problem. The dressing method which allows one to construct effectively the soliton solutions is effective also when L possesses reduction group of Z_N or D_N type.

Note, that most results in this direction regard Lax operators that are linear on the spectral parameter λ. Lately it was realized (conf. Vladimir S. Gerdjikov, On integrable wave interactions and Lax pairs on symmetric spaces ) that similar techniques can be developed also for the case when both operators L and M in the Lax representation depend polynomially on λ. For example, L may be quadratic in λ while M is polynomial of order 4; it is possible to analyze effectively also cases when L is cubic in λ and M is a polynomial of order 6. One can also introduce an additional grading in the Kac-Moody algebra which is to be combined with Mikhailov reduction. Such approach would allow one to construct new classes of N-wave, NLS and mKdV types with more complicated nonlinearities.

The Boussinesq equation is the first model of surface waves in shallow water that considers the nonlinearity and the dispersion and their interaction as a reason for wave stability known as the Boussinesq paradigm. This balance bears solitary waves that behave like quasi-particles. At present, there are some Boussinesq-like equations. The prevalent part of the known analytical and numerical solutions, however, relates to the 1d case while for multidimensional cases, almost nothing is known so far. An exclusion is the solutions of the Kadomtsev-Petviashvili equation. The difficulties originate from the lack of known analytic initial conditions and the nonintegrability in the multidimensional case. Another problem is which kind of nonlinearity will keep the temporal stability of localized solutions.

The experimental observation and measurement of ultrashort pulses in waveguides is a hard job and this is the reason and stimulus to create mathematical models for computer simulations, as well as reliable algorithms for treating the governing equations. Along with the nonintegrability, one more problem appears here—the multidimensionality and necessity to split and linearize the operators in the appropriate way.

Prof. Vladimir Gerdjikov is a renowned scientist with more than 200 publications, including: 1 monograph and Editor of five proceedings; 123 papers in scientific journals . Prof. Gerdjikov has been teaching University courses on Theory of solitons and their interactions, Lie algebras and integrable systems.

An almost complete list of Prof. Gerdjikov’s papers is available at google scholar and his detailed CV can be found here.

Prof. Michail Todorov graduated in 1984 and received his PhD in 1989 from the St Kliment Ohridski University of Sofia, Bulgaria. Since 1990 he has been Associate Professor and Full Professor (2012) with the Department of Applied Mathematics and Computer Science by the Technical University of Sofia, Bulgaria. For the last few years his primary research areas have been mathematical modeling, computational studies, and scientific computing of nonlinear phenomena including soliton interactions, nonlinear electrodynamics, nonlinear optics, mathematical biology and bioengineering, and astrophysics.